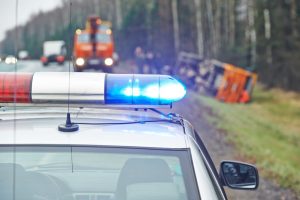 Drivers and passengers in cars and motorcycles are especially vulnerable in collisions involving large trucks because of the weight difference between the two types of vehicles. Cars weigh an average of 3,500 pounds, while large commercial trucks (known as semis, eighteen wheelers, and tractor-trailers) can weigh up to 80,000 pounds with their loads. In car-truck collisions, 98 percent of the fatalities were the people of the car.

The size and weight of trucks also affects how they interact with cars. Big trucks take longer to stop, are prone to rollovers and jackknifing, need more room to make turns, and have large blind spots. In slippery conditions, the trailers can sometimes swing out into the lanes of other vehicles.

Because of their inherent dangers to people in passenger vehicles and motorcycles, large commercial trucks are regulated by federal interstate trucking safety laws as well as by Illinois laws.

Trucking Accident Effects Victims of trucking accidents can sustain life-altering injuries such as:

Having an accident that involves a truck could be a life-altering experience. It can be devastating – especially if one or more of the members of your vehicle were killed or seriously injured in the accident.

When a tractor trailer or truck crashes into your vehicle, the odds are stacked heavily against those riding in the vehicle. They will likely incur some sort of physical or mental trauma as a result. At minimum, having an accident with a truck will often leave the passengers of the automobile severely affected and in need of medical, legal and financial assistance.

If you have been involved in a truck accident, it is important that you take all of the necessary steps to ensure the best emotional, physical and financial outcome for you and your passengers. Contact Caras Law Group today for a free consultation and case evaluation. Dean Caras and his associates have years of experience in handling trucking accident cases and will work to help you in the recovery process.

​If you have been involved in a trucking accident that was caused by another person’s negligence or recklessness, the most important thing you can do is speak with a skilled personal injury attorney.

Truck driver fatigue and drowsiness are conditions that result in reckless behavior such as failure to keep in the proper lane and running off the road. Tired truckers are of such concern that in April of 2003, the Federal Motor Carrier Safety Administration (FMCSA) instituted new hours of service regulations to curb truckers’ problems with fatigue. While these laws have helped reduce the number of accidents, the U.S. National Transportation Safety Board still blames driver fatigue as a probable factor in 20-40% of truck crashes.

​Sleep deprivation impairs a person’s ability to perform a variety of tasks, including those related to driving and operating equipment. Often a truck driver’s fatigue is caused by inadequate daily sleep, rather than a complete absence of sleep. A truck driver’s extended hours of operation can create a scenario of continuous sleep deprivation by limiting a driver’s daily sleep.

When commercial drivers become fatigued from excessive daily and weekly work hours, they substantially increase the risk of crashes that result in death or serious injuries. Yet despite this serious risk to public safety, legislation is frequently introduced to Congress that requests longer hours of service for the trucking industry.

On January 4, 2004 the new federal drivers’ hours-of-service regulations became effective for Interstate drivers of commercial motor vehicles subject to Title 49, Code of Federal Regulations (49 CFR) Part 395. Specifically, the law increased the number of hours truck drivers are allowed to operate in a 24 hour period. The law allows Interstate truck drivers to drive 11 hours in a work period, prohibit driving after 14 hours since coming on-duty, and require at least 10 consecutive hours off-duty to re-qualify for a new work period.

While significant effort is being invested to further regulate and limit the number of hours medical professionals can work in order to protect patient health, motorists are not offered the same consideration as Congress continues to increase the hours of service for the truck industry.

With miles and miles of highway stretching out before them, the longer truckers can drive the greater the potential revenue for truck companies. The average trucker drives 125,000 miles a year, and that’s on the low end of an average. Trucking revenues totaled $610 billion last year and revenues are forecasted to nearly double by 2015. It is easy to see how profit can encourage truckers to drive further for longer hours, with shorter breaks, to increase their income.

However, profit is not the only factor influencing driver fatigue. A truck driver may be anxious to get home for the weekend, or ‘push through’ to avoid traffic snarls during rush hour. Truck companies may offer a driver bonus for extra stops, or the driver may be trying to make up for time lost due to bad weather or traffic.

​Because there may be several factors influencing a driver’s hours of service, The Federal Motor Carrier Safety Administration requires that drivers and carriers maintain logs, expense receipts, and other paperwork that track their compliance with current Hours of Service regulations. However, in order for existing laws to deter unsafe behavior they must be properly enforced.

Kenneth Mead, U.S. Transportation Department inspector general, testified April 5 before the Senate Commerce Committee on transportation safety programs. “We have conducted criminal investigations of egregious cases in which trucking company officials have been prosecuted for systematically forcing their drivers to drive well in excess of the limits,” Mead testified.

Log book and hours rules need strengthening because unscrupulous carriers and drivers view violations as “the cost of doing business,” he said. The Federal Motor Carrier Safety Administration rescinded a proposal that would have required on-board recorders as enforcement evidence. Since then, courts have ordered the agency to review that decision.

​According to the American Trucking Association (ATA), in 2003 large trucks hauled the majority of all freight transported in the U.S. – over nine billion tons. With an ever increasing number of tractor trailers on our roads, driver fatigue is a public safety issue. We must mandate and enforce reasonable hours of service (HOS) limits for the safety of all motorists.